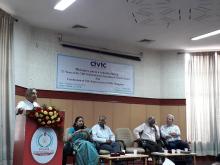 A voluntary citizens’ initiative emerged in 1990-91 as a forum for discussion and action on issues impacting Bangalore, its development and future. The initiative became a registered non-profit charitable trust, Citizens’ Voluntary Initiative for the City of Bangalore (CIVIC Bangalore), in 1992. Realizing decentralization in the urban context, through the implementation of the 74th Constitutional Amendment, has been our aim.  Our aim has not been to supplement or supplant government services but to make the government deliver on its promises to the people.  We have worked with the state and local governments and the general public, advocating for the desired changes. By focusing on democracy, decentralization and public participation, our activities promote good governance, inclusiveness, and improvement of service delivery.

In the last 6 years, given the growing disparities in the City, our focus has been on the urban poor.  The main tools used by CIVIC to improve service delivery encompass transparency, awareness building and empowerment of the community through the Right to Information, accountability through public interactions with officials for grievance reddressal and advocacy for systemic changes through public hearings, while acknowledging the procedures to be followed by the government itself.

At the ward level, our focus has been on bringing all sections of society, including the urban poor, on a common platform to plan, budget, and audit the ward programme of works of the BBMP and those of other line departments.

To ensure the continuity of the work started during the previous cycle, the overall goal of the present project is to “Facilitate better service delivery to the urban poor, in terms of access, participation and quality, with increased transparency and accountability”.

A world where every urban citizen is empowered to fully participate in governance to achieve a decent quality of life in an equitable society.

To be a platform for multiple stakeholders to achieve decentralized participatory local governance for a more inclusive, equitable and socially just urban space.

Objective 2: Increase transparency and accountability in service delivery to the urban poor.

The rights based approach is centred on: